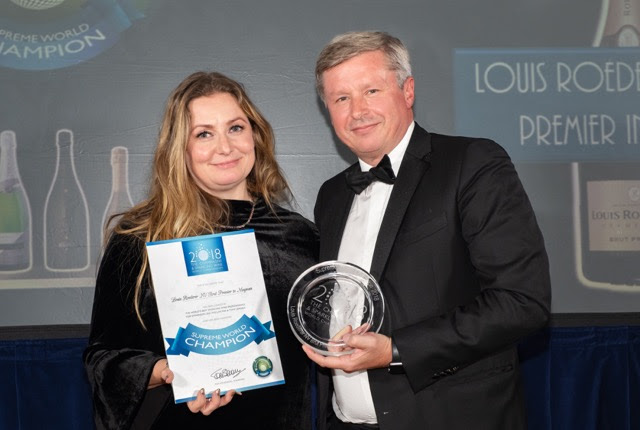 The room was filled with the most prestigious names in sparkling wine as they gathered to pay tribute to the talent and excellence that is recognised with these awards.

Jean-Baptiste Lécaillon, Chef de Cave of Champagne Louis Roederer was there to accept an incredible 9 trophies including Sparkling Wine Producer of the Year and Supreme World Champion for the Louis Roederer Brut Premier NV in magnum and a trophy for Roederer Estate in the US. With his signature humility he accepted the awards on behalf of Champagne Louis Roederer saying “it is a recognition of our unique terroirs and the terrific craftsmanship of all our vignerons and cavistes! As Chef de Caves I take it as a standing ovation to my Team Roederer”.

Richard Billett, Managing Director of Maison Marques and Domaines, the UK agent for Champagne Louis Roederer commented: “We are absolutely delighted that the passion, dedication, talent and hard work of the team at Champagne Louis Roederer has been recognised with the range and number of awards received. For the NV Brut Premier to receive the highest accolade of Supreme World Champion, amid such excellent competition, is true testament to the philosophy that underpins the approach of the Maison to the entire range.”