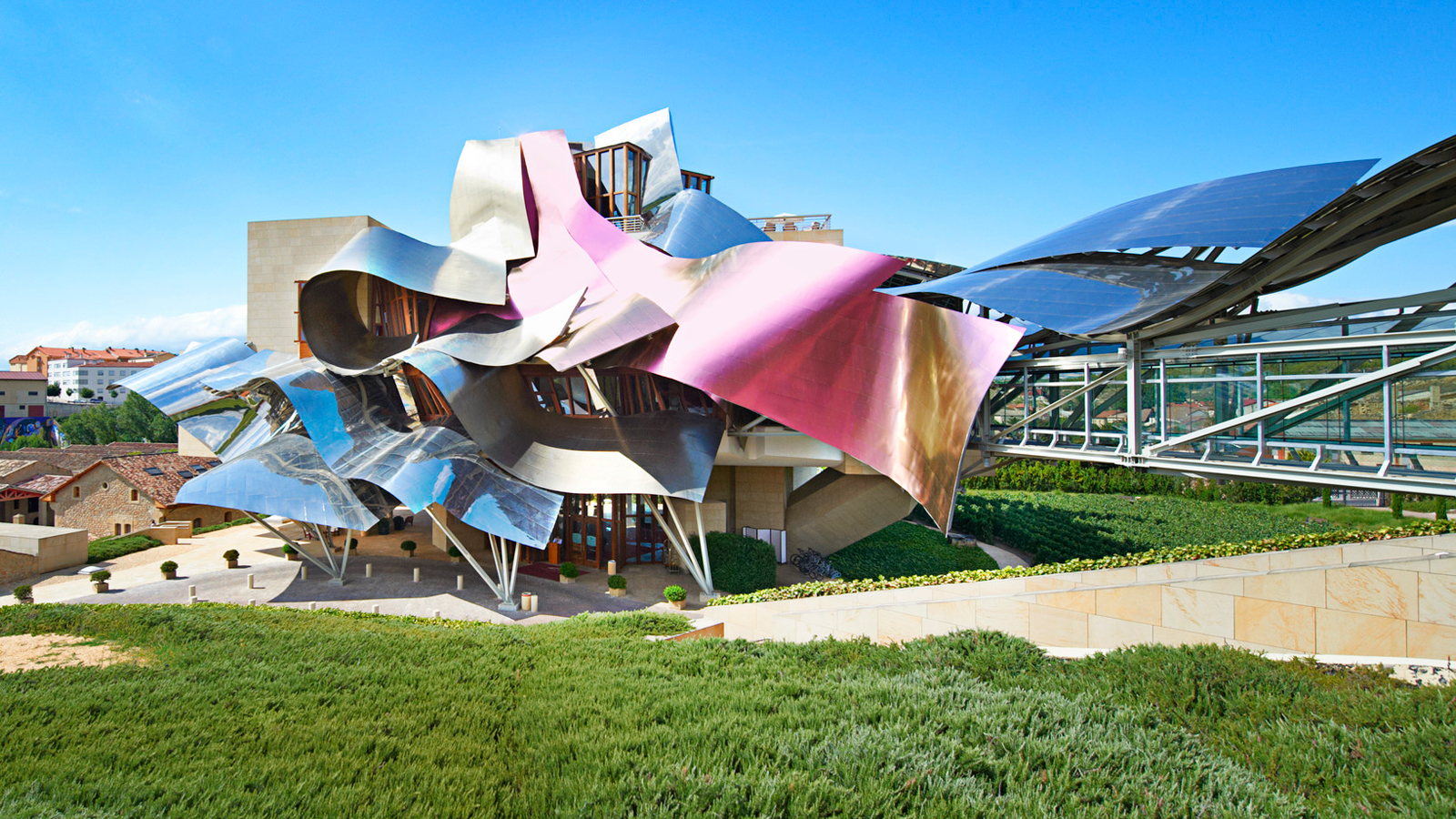 Michael Fridjhon recently returned to Marques de Riscal in Rioja after 25 years and came away hugely impressed by the quality of the wines despite the increase in production.

Wine and time coexist in a kind of paradoxical juxtaposition. Some bottles need the length of a human lifetime to reach their peak, others are as transient as the seasons. In some places, Georgia for example, wine is made using ancient techniques. In Bordeaux, even the best known – and most prestigious – estates are compelled to invest in massively expensive upgrades to achieve infinitesimal gains, simply to maintain their competitive edge.

We like to believe in the certainties of ancient wisdom, the truths which have acquired the stature of gospel – while at the same time we watch how knowledge and technology subvert “laws” which were once etched into the foundation stones of production sites. We celebrate natural yeast fermentation (without ever inquiring whether the ambient yeasts are any different from the commercial selections previously used at the cellar) because there is a promise of tradition and craft. We love the idea of winemaker’s intuition and yet we admire winery laboratories designed to ensure that cellarmasters can go about their work with absolute precision. In the midst of all these apparent contradictions, the one abiding truth we cling to is that it is not possible to increase volumes without a commensurate decrease in quality.
This law – of the inverse relationship between quantity and quality – is as much part of our DNA (nothing is gained without loss) as it is of the winemaker’s canon. So when I visited Marques de Riscal for the first time in about 25 years – and saw the extent to which the business has been transformed, in size, in range, and in the volumes produced, I was more than a little astonished. My initial thought was that its expansion from the original 19th-century winery and cellars to a modern behemoth could only have been achieved at the expense of the wine, a classic Rioja which has been the most famous name in Spanish wine around 150 years.

My tasting experience of the wines, over much the same period, contradicted this. At no stage did I feel as if the winemakers had over-commercialised the wines in the standard range? The annual releases of the Reserva had been consistent while the Gran Reservas I had sampled or cellared were equally impressive. In fact, my impression of the fabulous 2005 is that it will equal the 1994 – of which I have only a few bottles left. This left me with trying to reconcile apparently contradictory information – the more so once I chatted with Francisco Hurtado de Amézaga, the chief winemaker and a direct descendant of the founder of the business.

I discovered that over the period in question the overall volumes of Riscal wines had increased by 75%, while the range itself had seen the addition of several (admittedly small production) cuvées, most notably the 150th Anniversary Gran Reserva and the Frank Gehry special selection. Since these two additional products had been added to the top of the brand pyramid, there seemed the inevitable risk that whatever choice fruit had been put aside to create these vinous masterpieces would necessarily reduce the average quality of the wines into which the grapes had previously been blended. These assumptions did not survive the empirical experience of a day spent tasting there. From the whites which come from the Rueda cellar to the Tempranillo-based reds from Rioja, no single wine within the range appeared to be of a lesser quality than anything I had sampled in the past two decades.

For some of this there was an obvious explanation: amongst the whites from Rueda the newly introduced “Bio” Verdejo had a plushness and dimension quite unlike the standard cuvées with which I was familiar. In my experience, this added quality is partly the result of the extra attention which goes into the management of organic vineyards which might account for the palpable difference in quality.

The same argument cannot apply when it comes to the premium finely oaked white releases (wines like the Finca Montico and Baron de Chirel Viñas Centenarias) though here you might argue that the best fruit had been selected for these more highly priced reserve wines. Had that been the case, you might have expected that the standard Rueda would have emerged that much more emaciated, more two-dimensional and with less fruit intensity. This wasn’t the case, and there’s no ready explanation except that greater care in the vineyards and better fruit processing has made the overall gain possible.

When it comes to the reds, however, the sheer arithmetic appears to be stacked against the application of this theory. In 1995 the combined production of the Elciego (Rioja) cellar and Rueda (white wines) was six million bottles. Today, it is 10.5m bottles, with six million alone in the new, high-tech Elciego winery which crushed its first vintage in 2000. You can’t maintain quality and increase production by these percentages without other factors playing a key role in your success.

Some of the explanation is instantly evident the moment the technical staff take you through the new facility. Until the upgrade, the best wines of Marques de Riscal were produced in two buildings which had been built in the 1860s and 1880s, using technology which had been state-of-the-art in the 19th century. When I visited in the early 1990s, the working space was cramped but this didn’t seem an impediment as long as it could accommodate what needed to be done, for the volumes going into the market at that time. I was glad I didn’t have to manage the 3,900 barrels housed in that confined space, but the comfort of winery workers never features very highly in the considerations of the commercial team. When you consider the current production volumes and compare them to what was being handled then, the new facilities were inevitable. 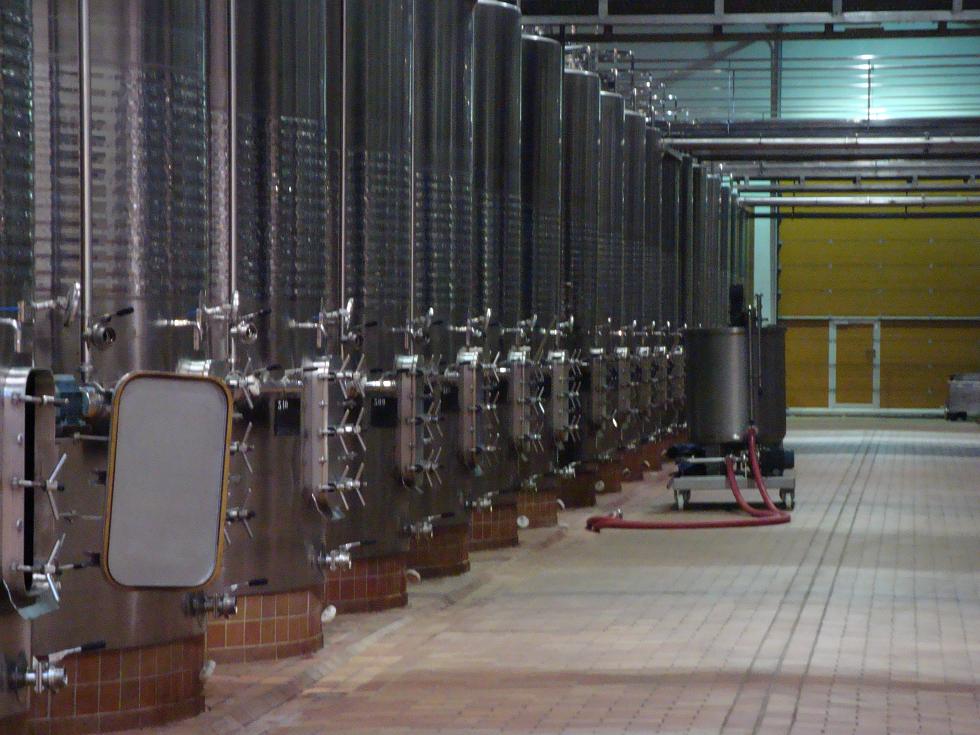 As you watch the team in action it becomes obvious that only by creating a massive new cellar could more wine, of better quality, be made by fewer people in the new working environment. There’s a simple of way of looking at why the new space makes for improved winemaking. The 37,000 barrels (a ten-fold increase) are racked every three months in the first year (and once or twice thereafter). This means that the clear wine must be drawn off the lees of one barrel and into another receptacle. The old barrel must then be thoroughly cleaned, steamed and sulphured before wine can be put back into it – 37,000 times every three months. The sheer physical movement of barrels, wine, and cleaning equipment needs height, space, volume. In the cramped 19th century winery where barrels cannot be stacked more than three-high, the sheer logistics become impossible.

The new Marques de Riscal is like the old business but on steroids. It is bigger and better, with greater range, more modern vinifications, more precise fruit notes, and the same or better maturation potential. Less has been left to chance, more happens under the direct watch of a winemaking team which has been augmented by access to the latest technology. All this is counter-intuitive to those brought up in the belief that small is beautiful. The current releases are luminous proof that the seemingly impossible can be achieved.